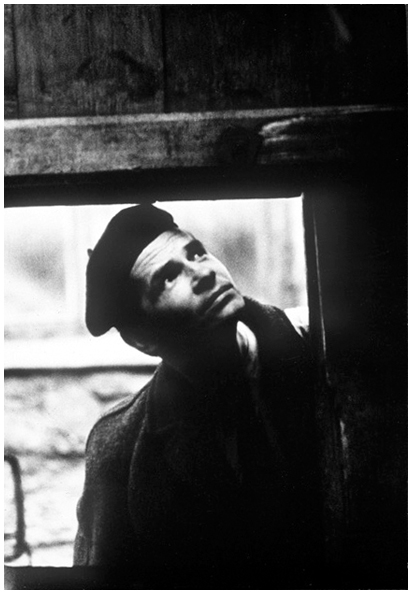 I am looking at my Father’s self-portrait of 1967. His eyes as if fixed with a certain interest at the numbers I have just written. They are true. And, at the same time, not. Living in the memories and feelings of so many people, with his works still radiating his good-heartedness and his bright look at the world, he cannot be gone. At least not too far away.

He was born and lived all his life in one and the same block. Bruninieku street between Caka and Avotu streets (the place and neighbourhood depicted in his series “Proletarian districts”). Here, being a little boy in the time of WWII, he was standing at the gates during bombing and waiting for his father and mother to come. He was holding a small case with the most necessary things his childish imagination had told him to put in it… which later turned out to be knives, spoons and forks. Here, with a bleeding nose, he was coming home from box trainings, but later on along the same streets he used to return from cycling races with bruised knees and elbows still carrying his broken sports bicycle on the shoulder. It is the place where he went out on dates and got married. And for the next 35 years moved to live with his wife Lia Spure – across the street. Here he grew from a photo amateur to what we know him now. Here, at nights and weekends on the kitchen table of a small fourth floor flat with no facilities all his well known works were born, the “raw materials” being brought home from yards of the neighbouring streets – their houses, flowerbeds, trees he had watched growing, sunbeam reflections in window panes – together with the aura visible only to the ones who have lived to the very heart of the place, to the ones to who even its imperfections have become dear. Can his “Proletarian district” series (included in Latvian Cultural Canon) be called a philosophical contemplation on a far from aesthetic environment as quite often  article writers tend to? No. There is no philosophy. And there is plenty of aesthetics. For the ones who belong. I would rather call it a self-portrait. The self-portrait of his inner world, of his soul, a portrait talking much more expressly and expressively than any words could. And the portrait of people who live there.